Catherine Carey Book Tour and Giveaway: The Doctor and the Tudors 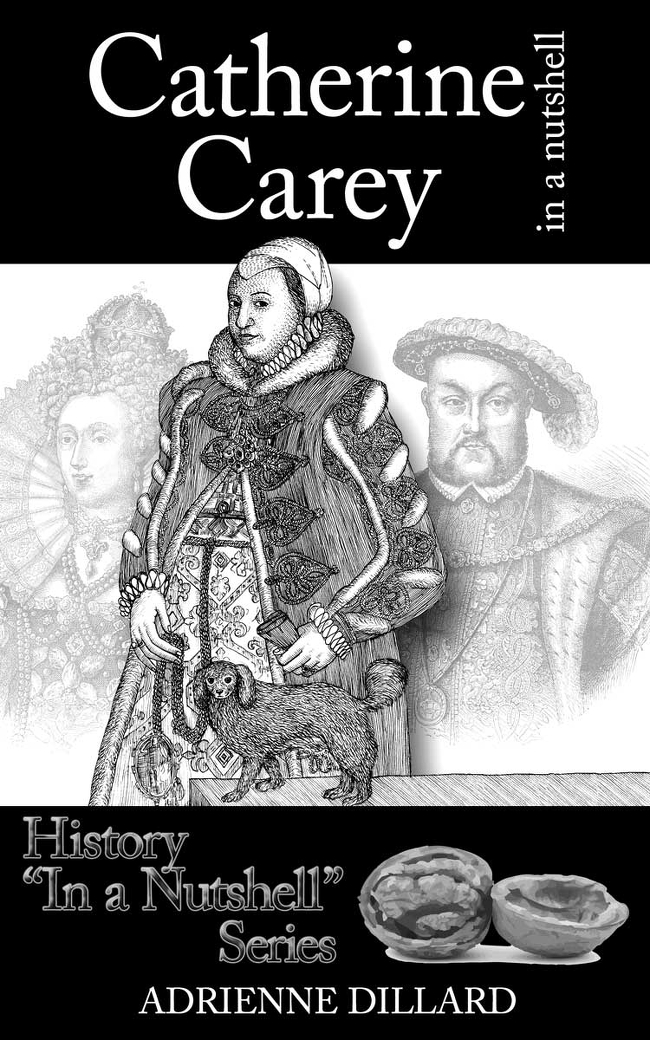 Adrienne Dillard, author of Cor Rotto: A Novel of Catherine Carey has returned with a brand new book, Catherine Carey in a Nutshell. Adrienne joins us on the first day her book tour to discuss two of her great loves, the Tudor dynasty and Doctor Who. Be sure to leave a comment after the article for your chance to win a copy of Adrienne’s latest book.

Doctor Who took us all the way forward to the 38th century this week, now Adrienne takes us all the way back to the 16th and 17th century and looks at the Doctor’s long relationship with those Tudor monarchs.

The Doctor and the Tudors by Adrienne Dillard

I am pretty well-known in my circle of friends and family for being completely obsessed by all things history. I have had a love affair with many eras and have enjoyed studying the raw determination of Colonial America, the ornate excesses of the Edwardian Period and the gritty hardships of Europe during World War II. Each era holds a special place in my heart, but the one I hold most dear is Tudor England. My obsession with Henry VIII and his family has made me a bit of an Anglophile. I have Union Jacks and posters of London all over my house. I’ve read the Harry Potter series about a million times. I drink tea out of a White Star Line Mug. So it came as a big surprise to my friend when I told her I had never watched Doctor Who. “Oh my God…How have you never watched Doctor Who? You would love it!” she cried.

A few months later I was reclining in my chair, healing from a major surgery, bored out of my mind and tired of daytime television. I flipped aimlessly through the channels and somehow landed on BBC. The Time of Angels was on and, before I knew it, I was sucked in, later binge watching the entire series on Netflix like it was my job. My friend was right, I loved Doctor Who! In fact, I kind of became obsessed! So… In honor of my two great loves, the Tudors and Doctor Who, I’ve picked out my favorite moments from the series when the two come together.

Reunited and it feels so good! 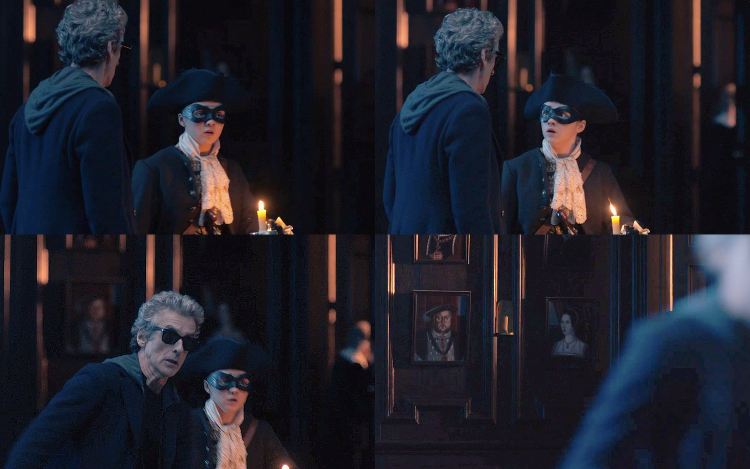 I am not entirely certain why my husband still watches Doctor Who with me. I’m sure I drove him nuts during this season’s episode, The Woman Who Lived. I peppered him with questions as I stared intently at the screen. “Is that Hever? That looks like Hever! Dang it, why is everything so dark in this episode?! I can’t tell if that’s Hever.” My husband heaved a great sigh, “I don’t know. I’ve never been to Hever.” Yes, I am that person. I can’t just sit back and keep my mouth shut. I get excited and it shows. So imagine my squeal of joy when I saw Henry VIII and his second wife peering over the Doctor’s shoulder during their robbery of the Fanshawe’s estate. Sadly, they were only portraits and if you had blinked at that exact moment, you missed them…I had to go back later and replay the episode just to be sure. Henry’s desire for Jane Seymour and Anne’s failure to produce a son may have separated them in life, but for one bright shining moment on Doctor Who, they were together again, in portrait form.

*After some investigation (and help from Claire Ridgway) we have identified the house in The Woman Who Lived as Tredegar House, Newport, where the Dulwich Portrait of Anne Boleyn resides on long-term loan.

The Bisley Zygon? Will the real Virgin Queen please stand up? 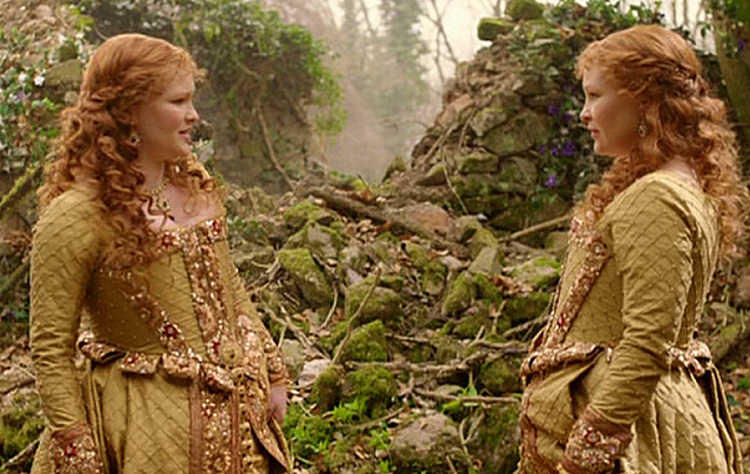 There have been mutterings for years that the true Princess Elizabeth died as an infant and a changeling, in the form of a baby boy, was secreted into her cradle to take her place. This Bisley Boy, as he is known, ruled the whole of England while wearing a dress, somehow hiding the truth of his gender from the women who dressed him, and likely saw him naked, every day. But what if the Bisley Boy wasn’t just hiding his gender? What if he was hiding his species? What if the Bisley Boy was really a…ZYGON?! GASP! The look of surprise on the Tenth Doctor’s face in the 50th anniversary episode, The Day of the Doctor, when he learned that his royal fiancée was a hideous crimson beast covered in suckers was truly priceless. Lucky for him, the human Elizabeth showed up just in the nick of time…Only to confuse things even more. The Doctor’s marriage to this feisty Tudor has been hinted at in several episodes so it was satisfying to see how it came about and Joanna Page’s portrayal of Good Queen Bess was witty, charming and terrifically clever. This is one of my favourite episodes and I loved the fact that part of it took place in 1562. Even if Catherine Carey never made it on to the screen, she had to be lurking around the bedchamber of the Zygon queen.

What Sorcery is This?! 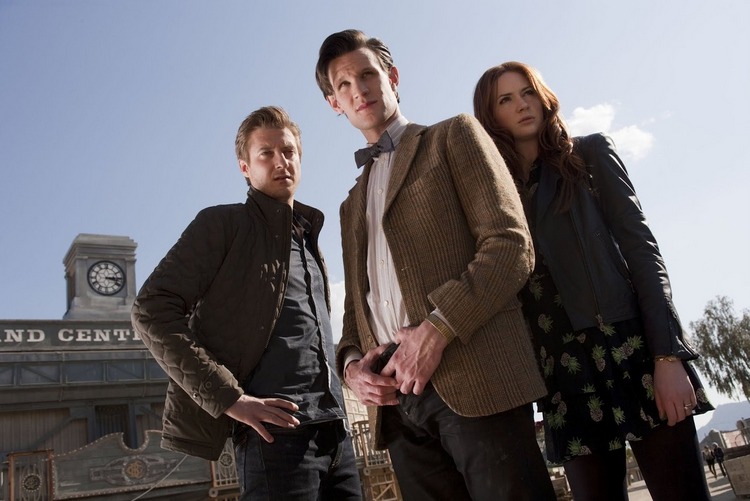 Ok, ok – this one is kind of a cheat, but in all fairness, my first doctor was Eleven and this was the first reference I caught to my beloved Tudors. When the Doctor comments on the anachronistic electricity powering the old west town of Mercy, Rory brushes it off as being “only a few years out.” The Doctor replies with a smirk, “that’s what you said when you left your phone charger in Henry VIII’s en-suite.” Sure, Henry VIII is only mentioned in passing in A Town Called Mercy, but it’s a fantastic foreshadowing of their adventure in Tudor England during the next episode, The Power of Three. Plus, I couldn’t help but picture the red faced bloated king clutching the phone charger in anger screaming “What sorcery is this?!” 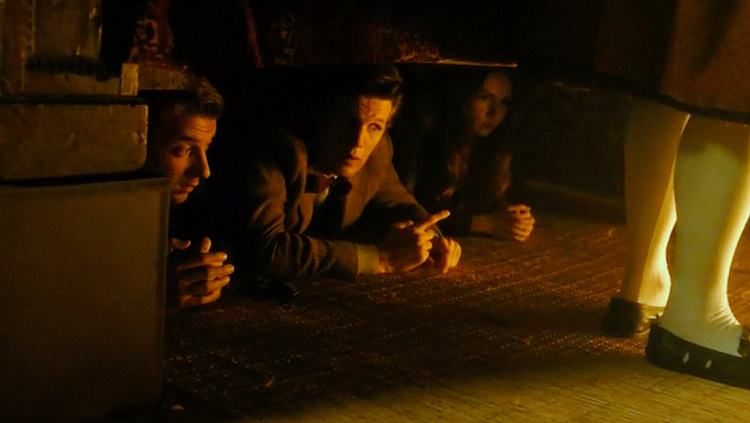 Hey, remember that time when the Doctor’s mother-in-law married his father-in-law? No not Rory, the other guy – Bluff King Hal? Seriously, how twisted is this family tree? Just when you thought you had figured out the tangled relationships between the Doctor, River Song and the Ponds (not the Williams’ mind you), they throw another wrench at us. In The Power of Three we see Amy, Rory and the Doctor crammed together under a bed staring out at a gorgeous pair of calves covered in white hose. Well, we all know who has the shapeliest legs in Christendom…“You just married Henry VIII on our anniversary!” Rory whispers furiously. So many redheads, so little time…and space. 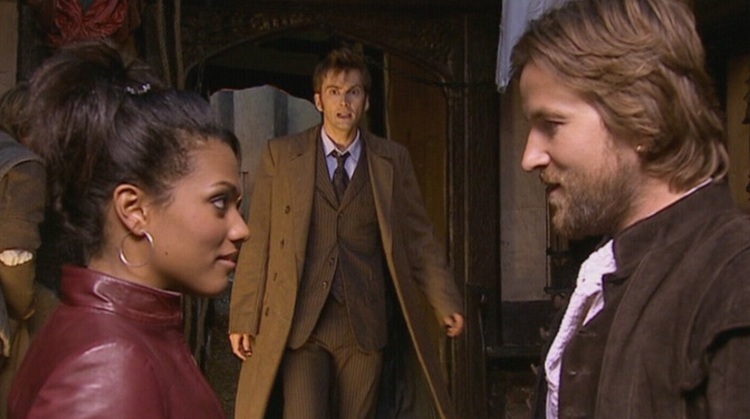 Ok seriously…Harry Potter and Shakespeare on Doctor Who? Be still my beating nerd heart. Not to mention the fact that the Doctor is played by none other than Barty Crouch Jr. himself?! Genius! Or, as Martha would say: Author! Author! Tudor England is embodied wonderfully in this episode and I couldn’t help, but wish I had been there to see the Globe Theatre in all its glory. After vanquishing the Carrionites with a perfectly timed Expelliarmus, the Doctor and Martha make their escape from a furious Queen Elizabeth I who declares the Doctor her sworn enemy. That incident with the Zygons was only 37 years ago and she knows how to hang onto a grudge. 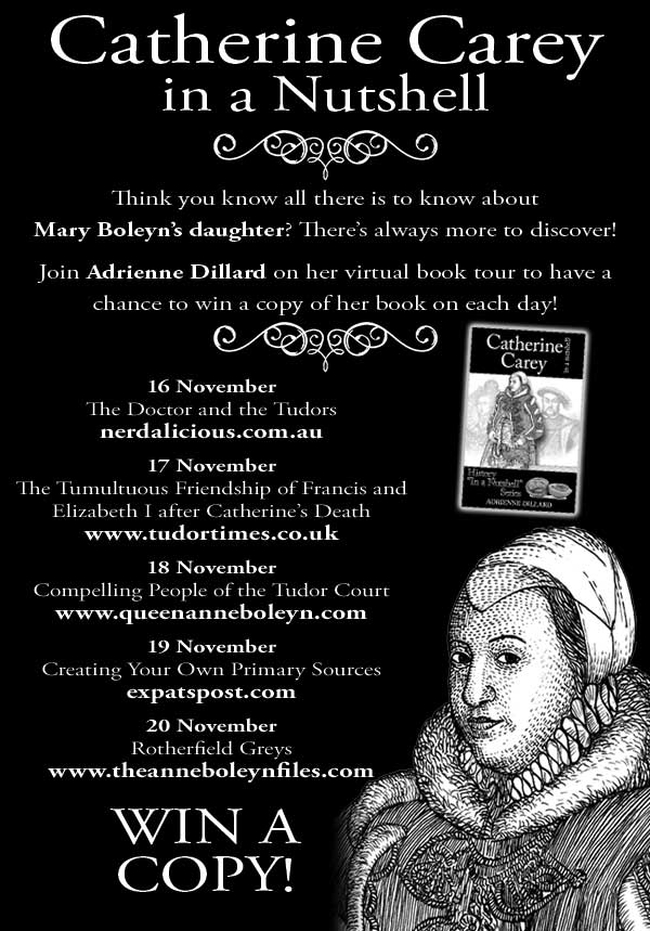 We have one copy of Catherine Carey in a Nutshell to give away courtesy of MadeGlobal Publishing!

To enter just leave a comment below telling us what you would do if you had the T.A.R.D.I.S. for a day and were allowed to cheat and change one event in history – or why you’re looking forward to reading Adrienne’s new book.

Entries close Sunday 22nd November at midnight. Please keep an eye on your inboxes, the winner has five days to respond or a new winner will be chosen.

Catherine Carey in a Nutshell examines the life of Catherine Carey, daughter of Mary Boleyn, from the controversy surrounding her paternity through her service to Henry VIII’s queens, the trials of life in Protestant exile during the Tudor era, and the triumphant return of the Knollys family to the glittering court of the Virgin Queen.

Adrienne Dillard, author of the best-selling novel Cor Rotto: A Novel of Catherine Carey brings together what is known about one of Queen Elizabeth I’s most trusted and devoted ladies for the first time in one concise, easy-to-read book.

Click here to buy Catherine Carey in a Nutshell with free worldwide shipping.

Click here to buy Catherine Carey in a Nutshell on Kindle. 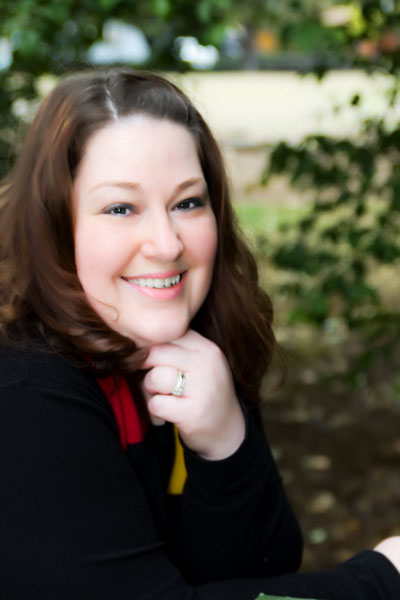