Godzilla has always been a tabula rasa, more than a monster, a symbol of nature, and nature’s fury, of man’s folly, the limits of science and knowledge, of the monster we inadvertently create returning to humble our arrogance, but Godzilla’s fury is also that of an injured beast, lashing out, a mother threatened, defending a child, a child itself, thwarted, angered, its tantrum like a storm seeking only the calming depths of mother ocean.

Godzilla is also a defender against far greater threats, ravenous alien chimerae and unrelenting, heartless technology. Our monster, our creation, our destroyer and saviour. Out of destruction of the old order, a new understanding, a more harmonious life comes into being. Godzilla is a lesson, a warning, a teacher, a hero, a protector of the innocent. A blank slate, with a vast heart, a voice of fire and oh so human eyes.

Godzilla began life as the hokey monster in a cheap 1954 Japanese sci-fi film, a rehash of the Hollywood B movie creature feature, The Beast From 40,000 Fathoms, from the previous year. While both played on atomic age fears of the unknown consequences of atomic warfare and nuclear testing, Godzilla was more than a mere rampaging prehistoric monster. Godzilla mythologized the unfathomable horror of the atomic destruction of Hiroshima and Nagasaki, so that through understanding, healing, and renewal could begin.

How does an atomic mutant, part cautionary tale, part Shinto god of destruction, connect with one of the original nerdish anthems, one of the most poignant and beautiful songs of the 1970s?

Through the remarkable Janis Ian, singer songwriter, musician, Grammy winner, science-fiction author, poet and composer of Godzilla haikus. Her song Society’s Child, about love across the racial divide in 1960s America was an icon of the era. The subject so controversial at the time that some stations wouldn’t play it, and Janis received death threats. The original release has something of the feel of a 1960s girl group pop love song, not surprising as it was produced by Shadow Morton, who wrote and produced Leader Of The Pack for the Shangri-Las, but also Janis’s soulful folk guitar, cut through with some psychedelic harpsichord and funky electric organ.

At Seventeen, her poignant, sad beautiful reflection on youth, on being an outsider, an ugly duckling in a milieu that values popularity, attractiveness above all else, touched hearts around the world in 1975, and is as timeless, as universal, as moving today. You can find her classic albums on iTunes.

In a 2009 performance and conversation (at 92nd Street Y) Janis said of the song, “I really was totally convinced that I was the only person on Earth who had ever felt this way, and it was so embarrassing to me, and so shameful and humiliating to me, that when I finished writing it, I promised myself I would never sing it, because I couldn’t imagine getting up in front of an audience and exposing myself this much to the possibility of ridicule.”  We can only thank Janis for her honesty and bravery. I know as a weird, unattractive, outsider kid it moved me, made me weep, consoled me, told my story too. I guess it’s sort of a nerd anthem. A love song for the unloved. It is a song loved around the world; it told a lot of people’s stories.

Both songs have been inducted into the Grammy Hall of Fame, she has won two Grammy Awards and been nominated 9 times, and that’s not the least of her musical creativity. To stay up to date, go to janisian.com. She still performs, tours, writes today. For something amazing, see her on stage with another legend, guitarist Tommy Emmanuel, last year at The Philadelphia Folk Festival.

Janis Ian has always been a reader of science fiction, a fan, and more recently a writer of science fiction short stories. There’s even a collection of short stories by other authors based on her songs. One of her most recent pieces is Dark Carbuncle – with Kevin J Anderson, about a dead rock star whose fans can’t quite let go, which you can get here for iBooks and also on Amazon.

Santōka Taneda said, “Haiku is not a shriek, a howl, a sigh, or a yawn; rather, it is the deep breath of life.”  One can only wonder what the traditional masters would think of Godzilla Haiku. A traditional haiku is marked by the juxtaposition of ideas, and a word that both divides and joins the two images. Traditionally haiku explored nature, and would use a kigo, a word that referenced a season. Thus kawazu (frogs) recall spring, hachisu (lotus) midsummer, kakashi (scarecrow) autumn. The early 20th century saw a movement toward free-form Haiku, on from the strict adherence to the traditional 5/7/5 syllable scheme, nature and the kigo, to a form that explored diverse aspects of experience, while adhering to the principle of juxtaposition. How things change and turn. Haiku has spread around the world. In English, in Australia, bushfire could well be a kigo that references summer, but also fear, danger destruction. In California, volleyball might be a kigo that calls forth summer, sunshine, play, youth. In effect the kigo is a shorthand that invokes both the thing itself, and its context.

What does Godzilla invoke? Here there are no hard and fast rules. Is Godzilla perhaps a kigo of winter, destruction, or as the creature returns to the sea, a kigo of another sort, signifying depths, the soul, the id? The context is often determined by the accompanying image, baby Godzilla with children, Godzilla dancing with 1960s Japanese pop idols, Godzilla wreaking havoc.

Janis Ian has been composing haikus, inspired, connected, referencing Godzilla in various ways for over a year. She also sometimes invites fans to submit their Godzilla haikus. She shares them on her Facebook timeline, (also a great way to keep up with news on her music and SF writing).

Many are witty, clever, glib, playing with the monster, the form, or the process. Godzilla is an empty canvas, on which we can paint joy, sorrow, humour. The foolishness of a man in a rubber suit easily becomes as important as the grand mythology. Most adhere strictly to the 5/7/5 pattern of syllables, some don’t juxtapose and join. Some barely light on Godzilla at all, words turn obliquely, hesitant nevertheless, amuse and surprise. Check the gallery for a selection, and find more on Janis Ian’s Facebook, and on Samurai Frog’s Godlzilla Haiku Tumblr.

As poet Etheridge Knight said, in his poem Haiku, 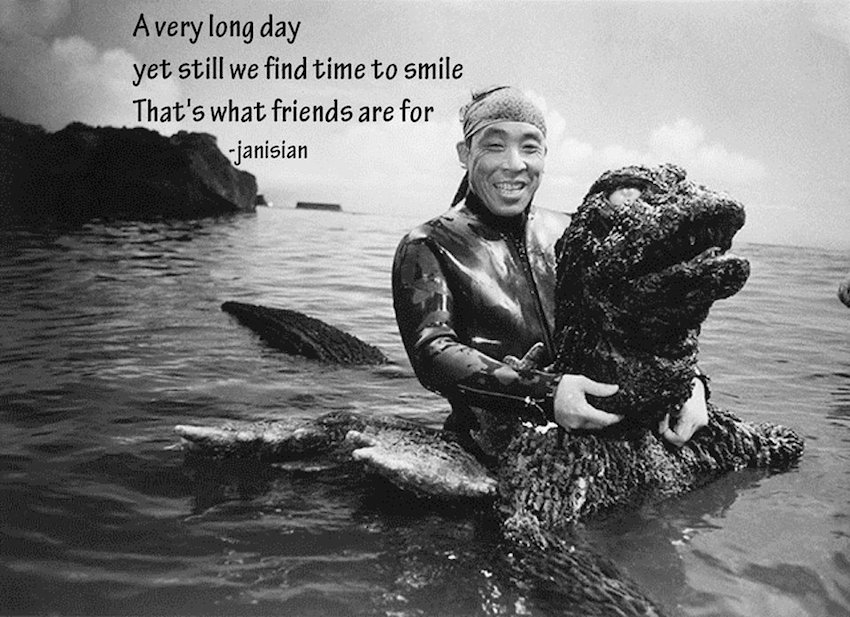 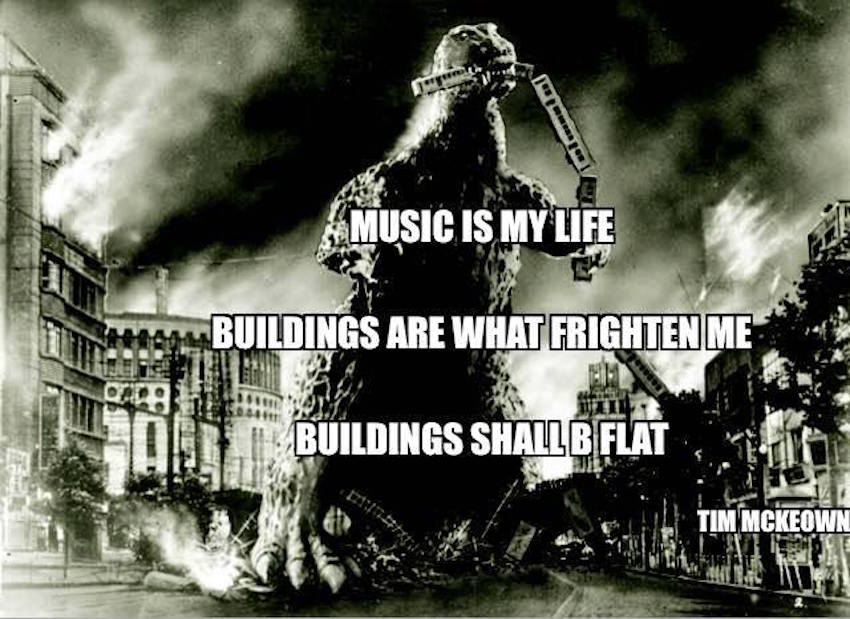 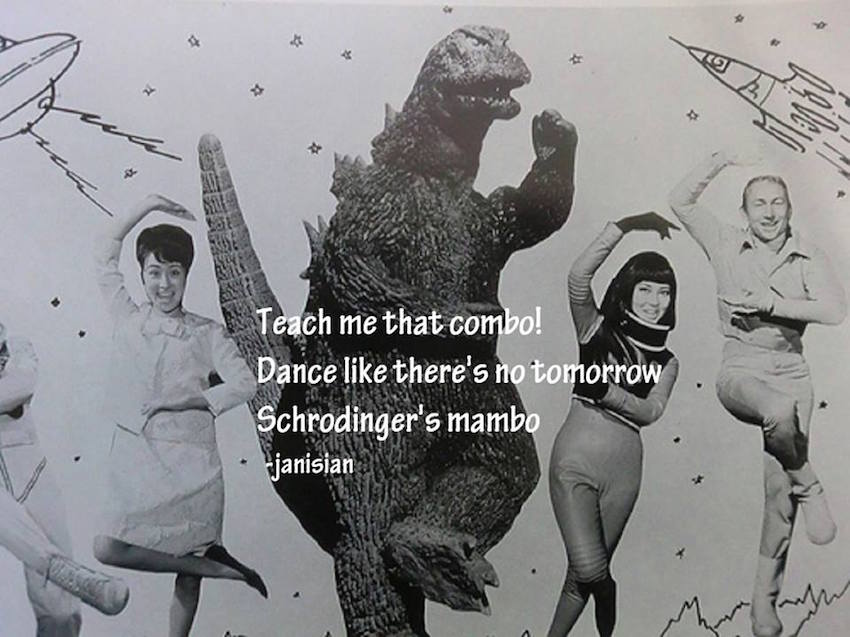 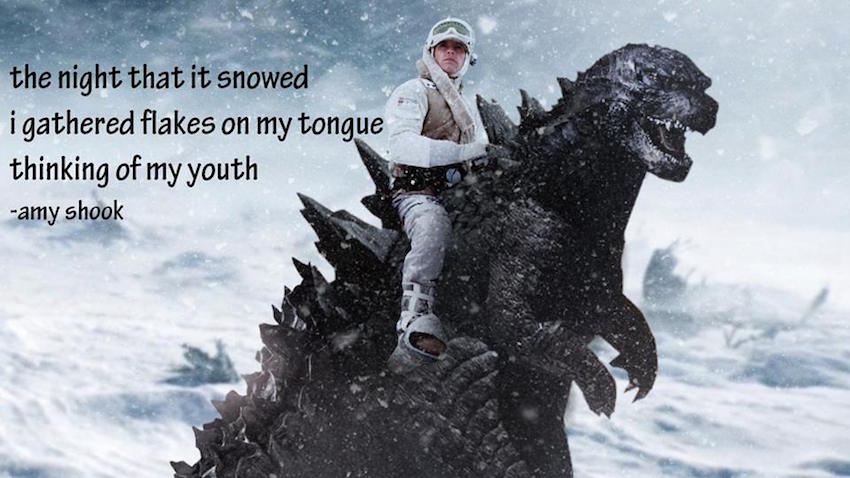 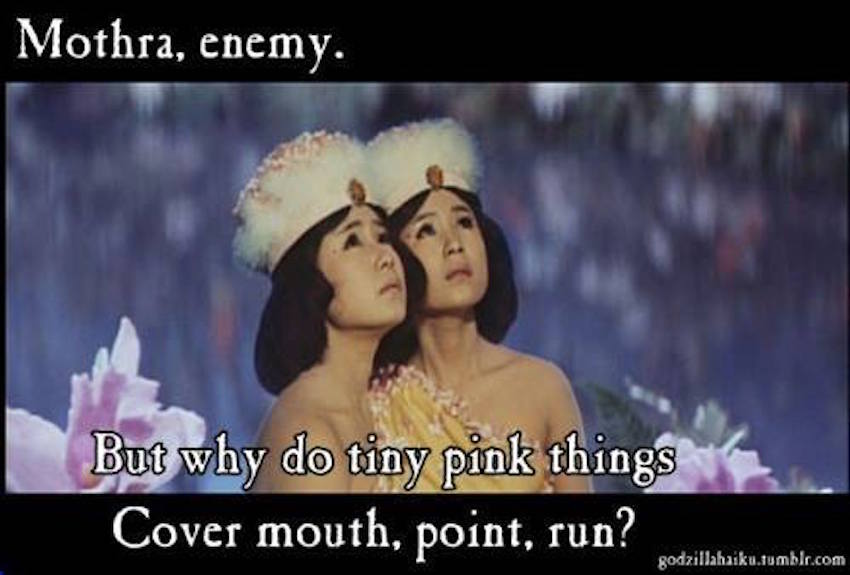 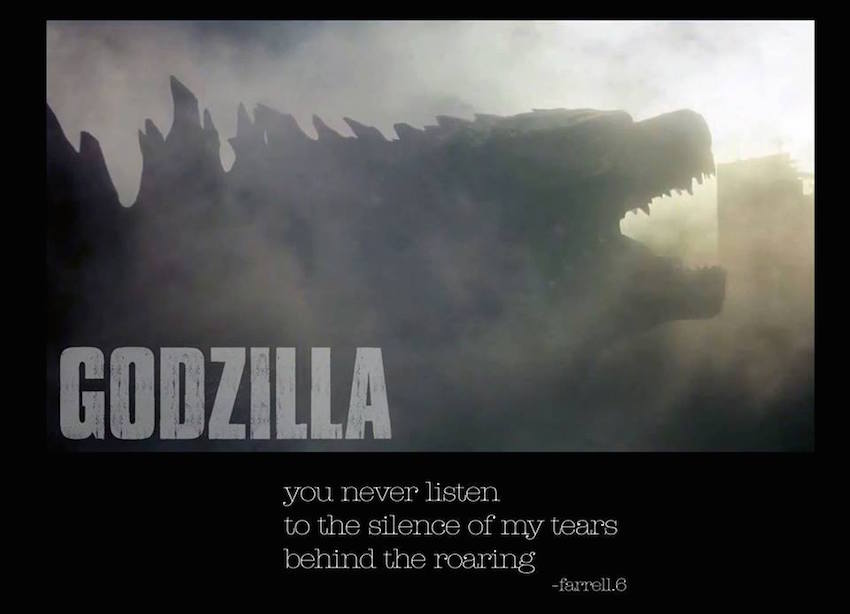 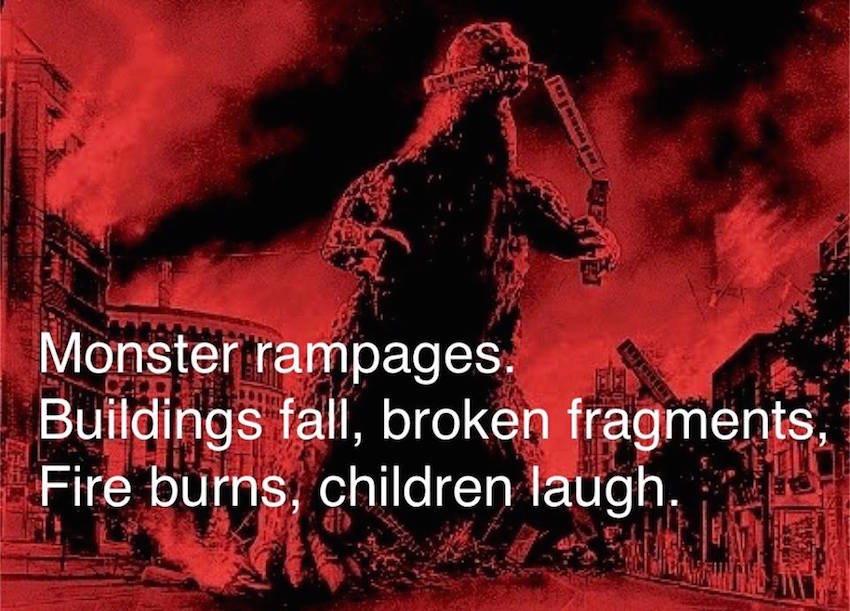 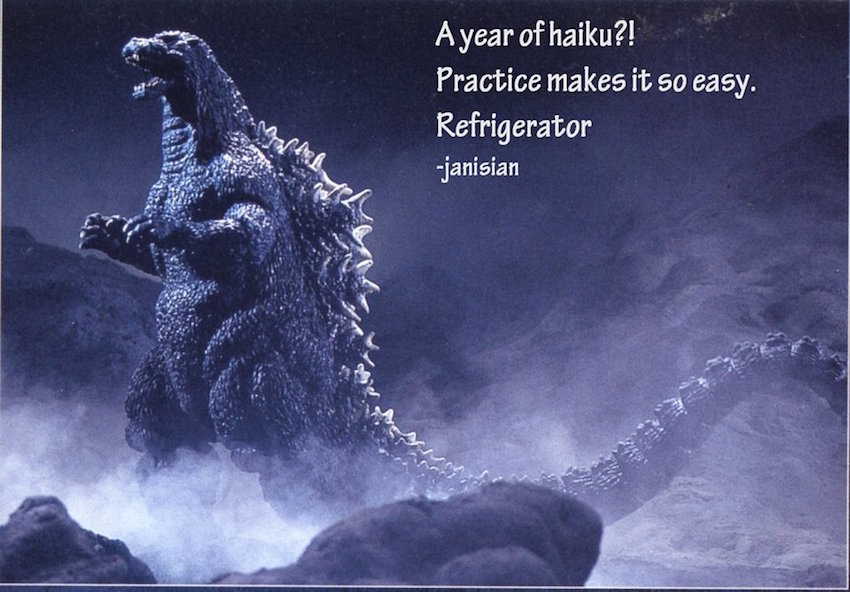 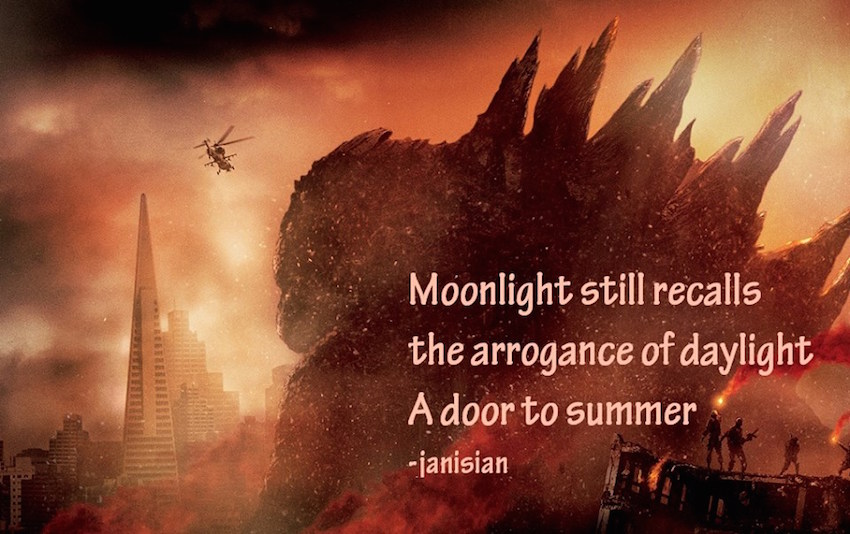 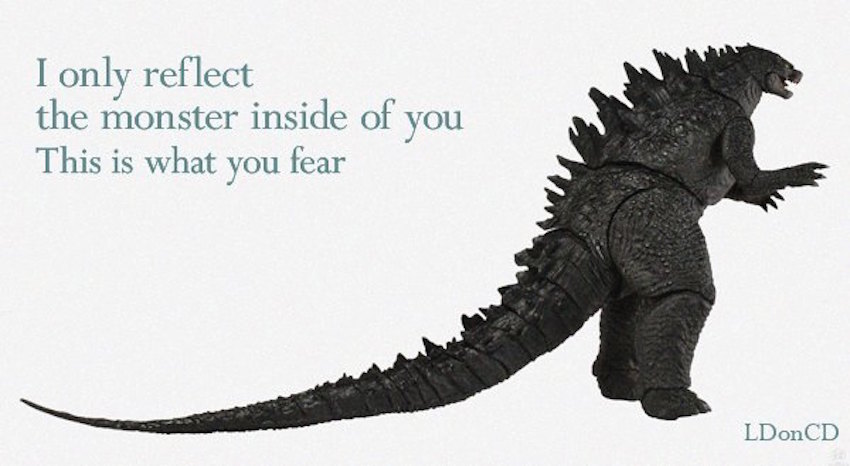 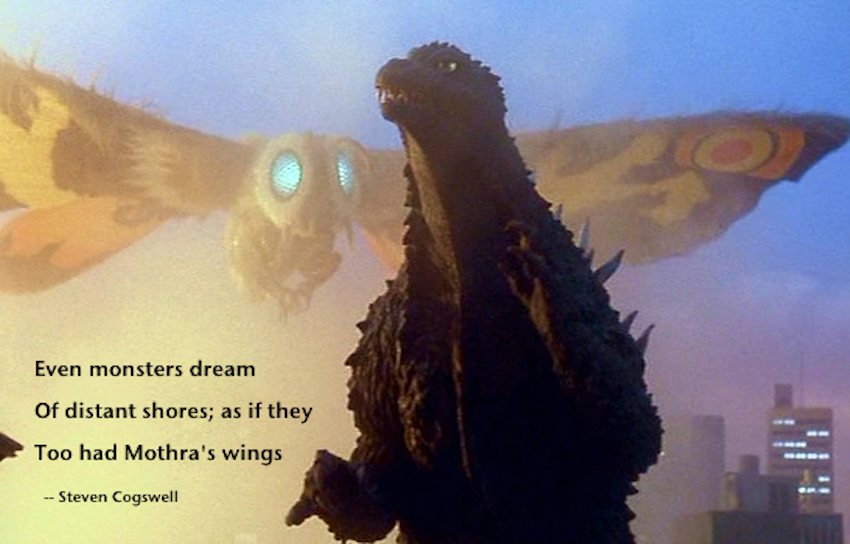 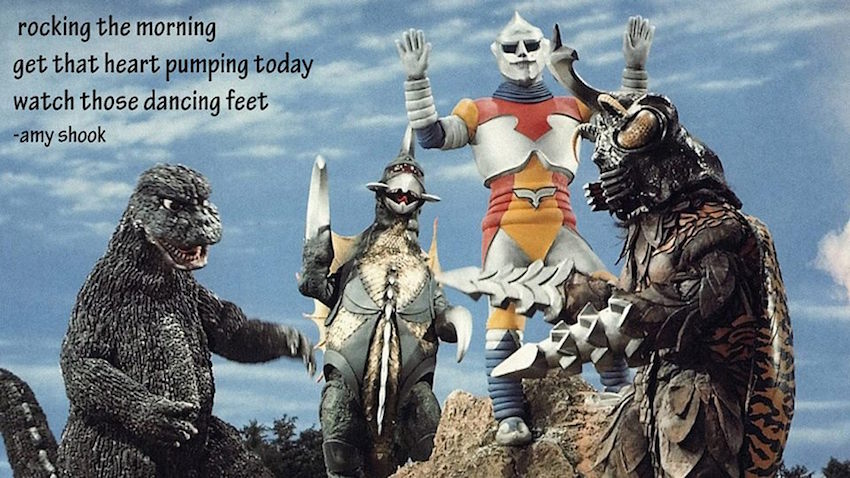 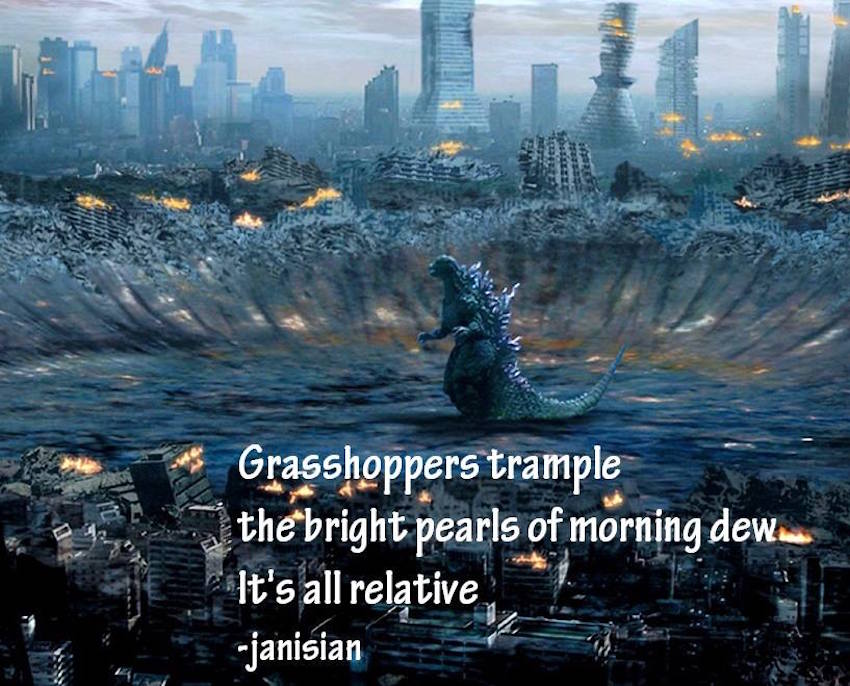 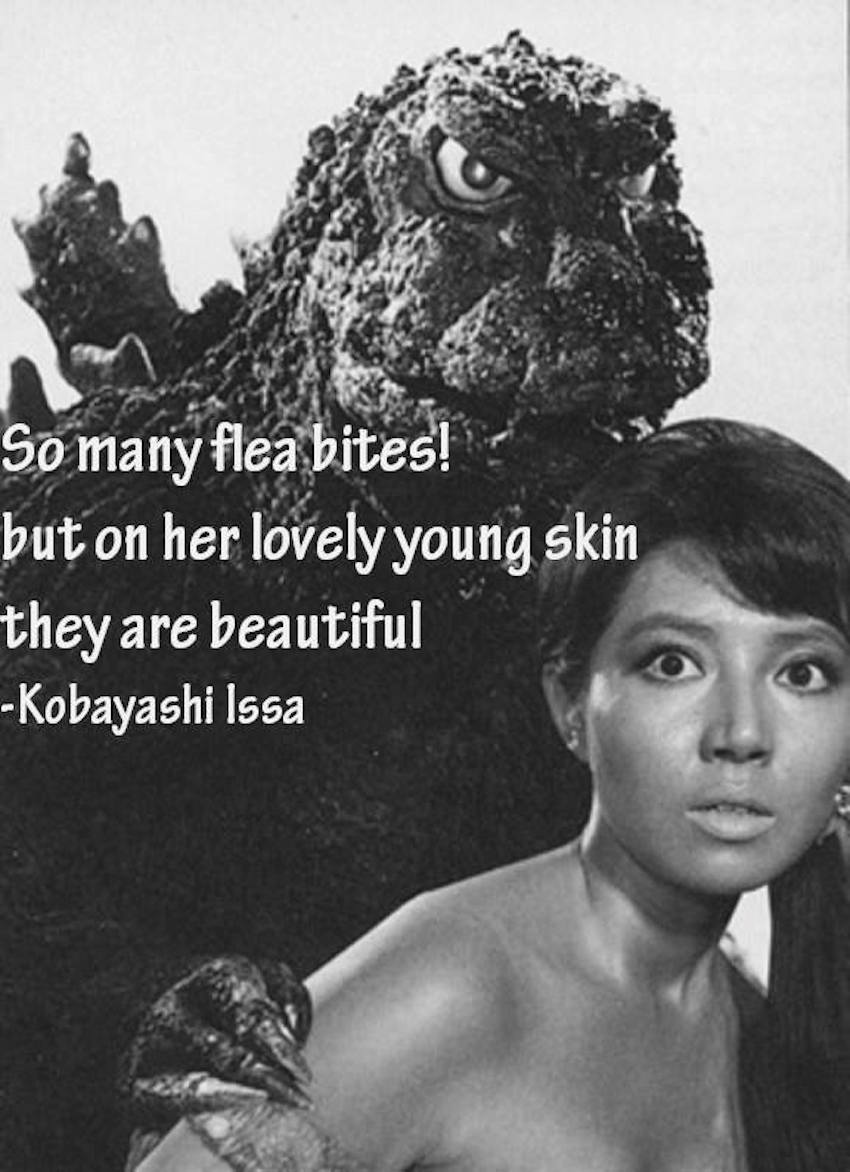 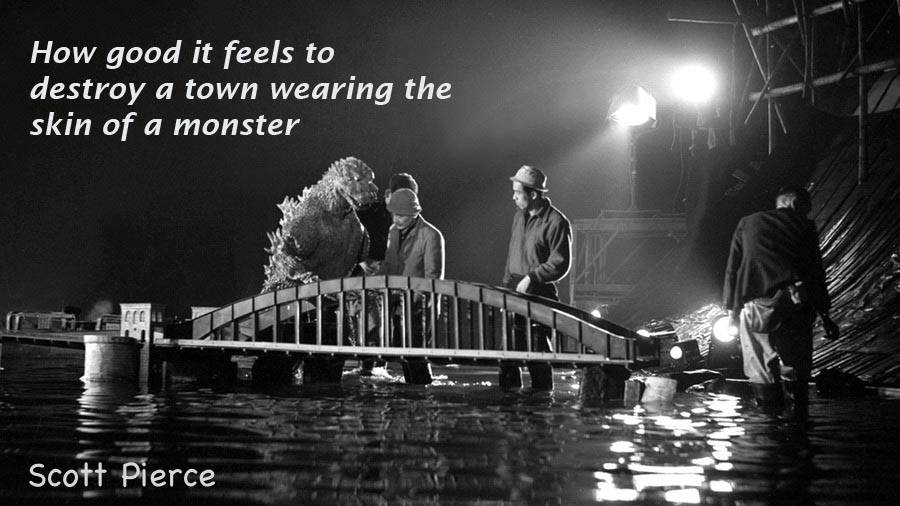 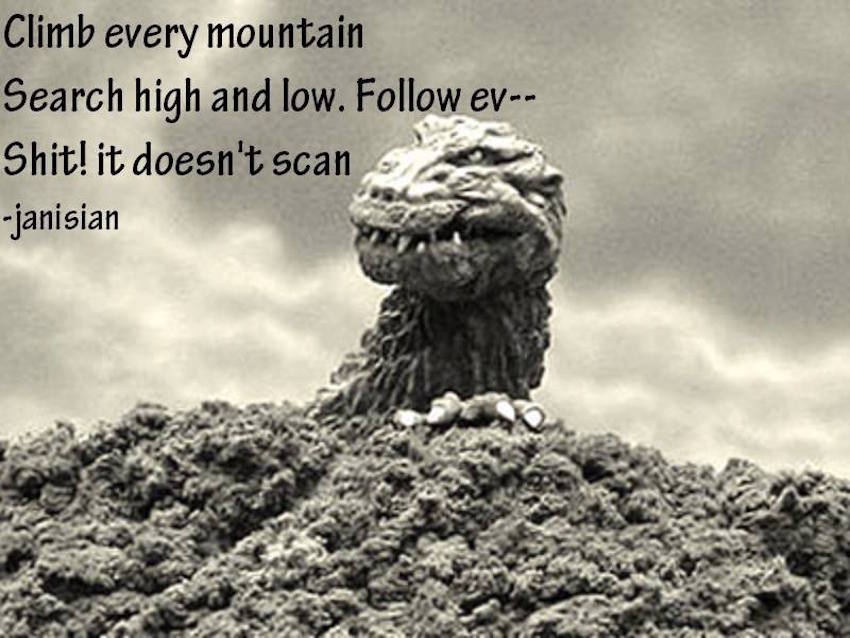 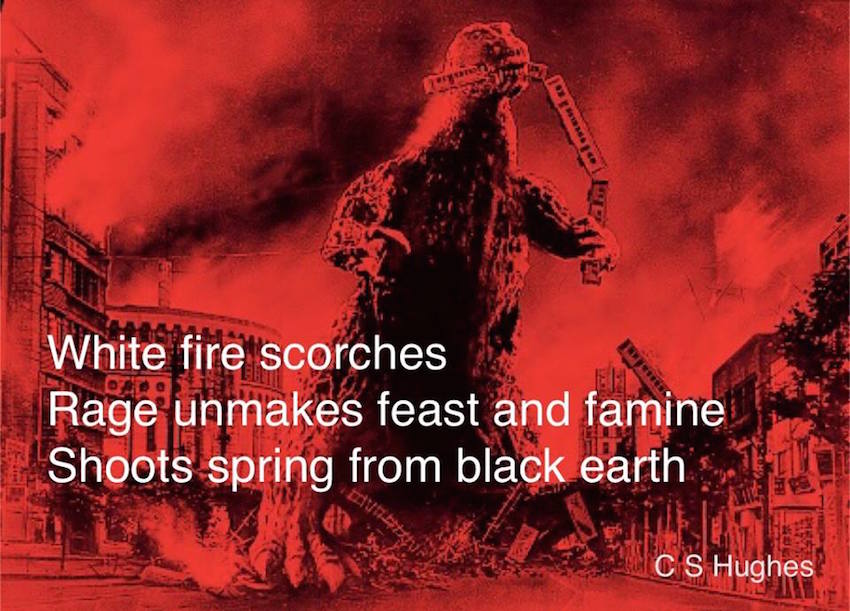 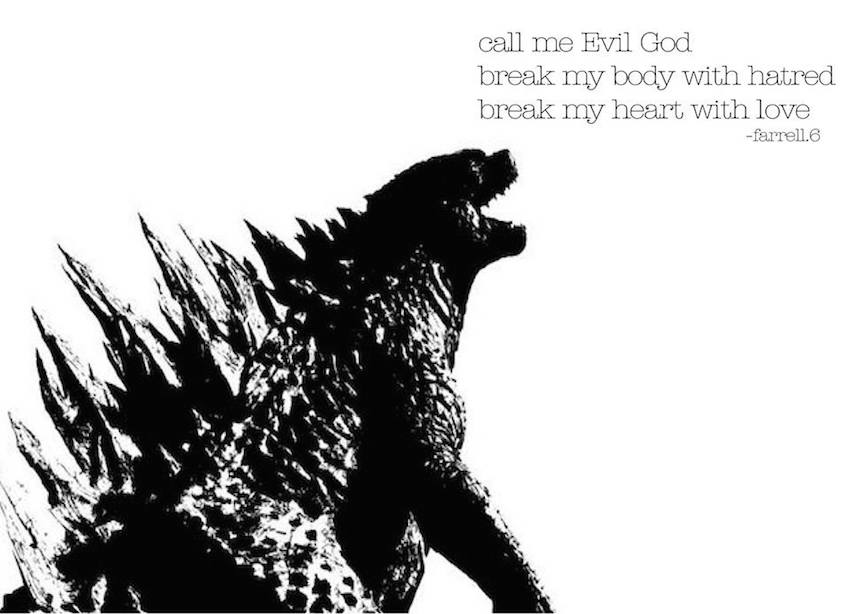 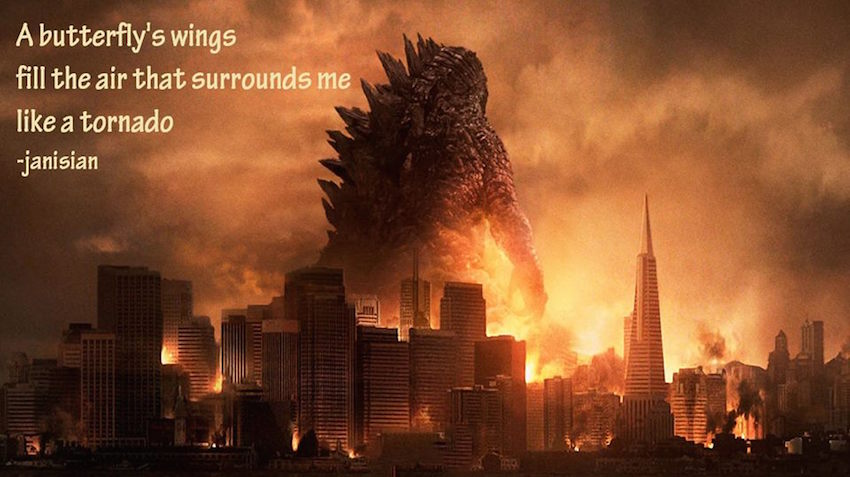 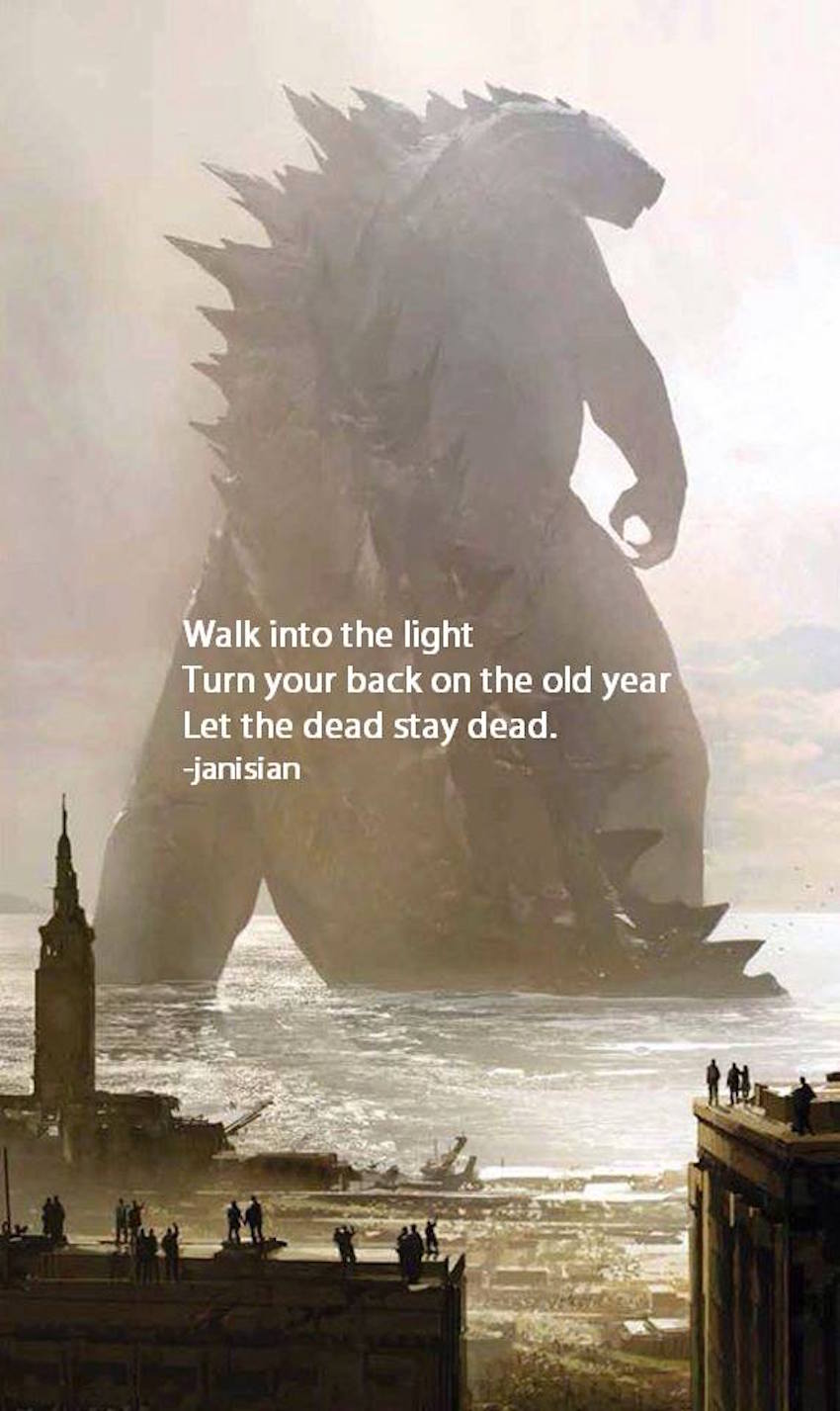 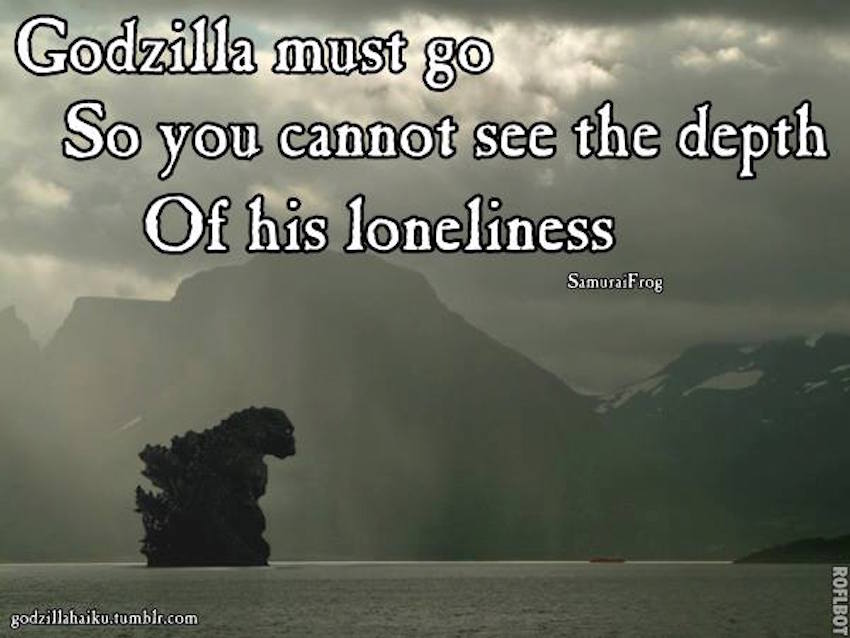 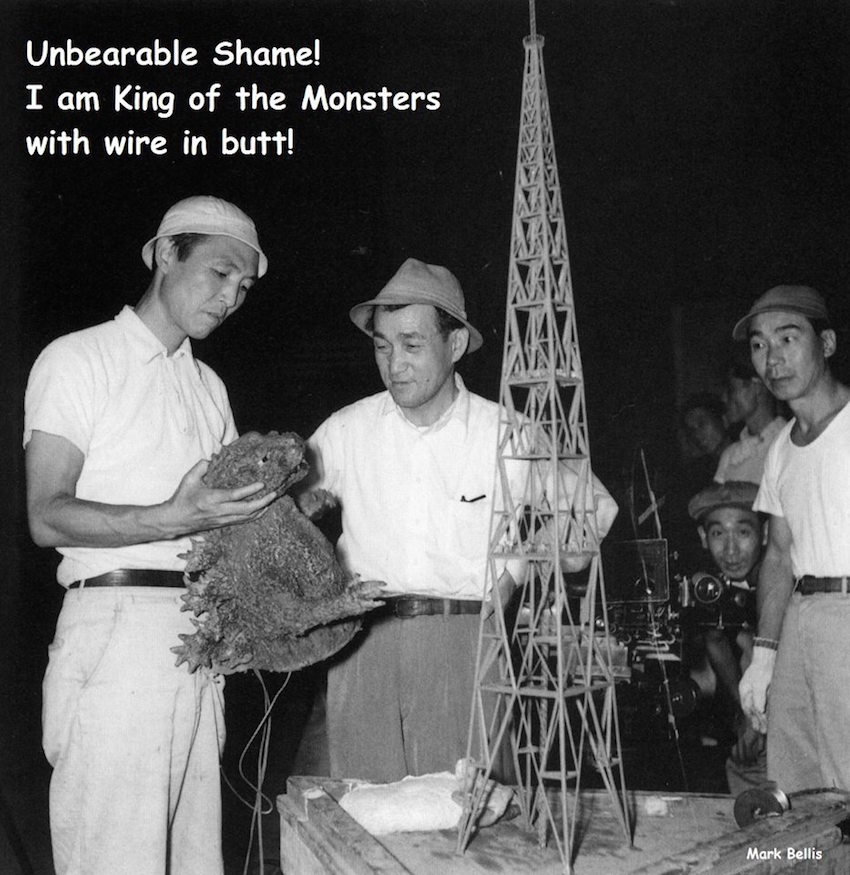