After Cardinal Wolsey gave Hampton Court Palace to Henry VIII, Henry’s first improvement was to expand the palace kitchens. They were made up of fifty-five rooms and staffed by 200 people who provided 600 meals twice daily for the court. Such a large operation would obviously have to work to a schedule, and the main meals were served at ten o’clock and four o’clock each day. Henry VIII did not enjoy having to return to the palace ‘upon the time prefixed for dinner and souper‘, especially if he had ‘gone further in walkeing, hunting, hawking or other disports’.1 So Henry had his own privy kitchens built, ensuring he had the finest cooks and ingredients at his disposal and could be served when he pleased. Henry also had a privy kitchen built for Anne Boleyn in 1533, which was situated beneath her presence chamber. The privy kitchen not only offered convenient access to hot meals for the King and Queen, it also kept their apartments warm.2

Henry’s French cook Pero created many rich dishes for the king and queen, but there was some humble fare on the menu. Henry enjoyed savoury puddings made with meat and cereal mixtures cooked in their skins. The ‘wife’ that made the king’s puddings at Hampton Court was paid 6s 8d from the Privy Purse expenses. 3 Thomas Dawson’s Good Housewife’s Jewel, published in 1596, has various recipes such as black pudding, haggis and hog’s pudding.

To make a Hog’s Pudding – Take the liver of a hog and parboil it. Then stamp [it] in water and strain it with thick cream. Put thereto eight or nine yolks of eggs, three or four whites, hog’s suet, small raisins, cloves and mace, pepper, salt and a little sugar, and a good deal of grated bread to make it thick. And let them seethe.4

While pottage, a porridge-like soup thickened with oats or barely and vegetables, was an everyday staple for peasants, the nobility also enjoyed pottage, albeit as an accompaniment to the main meal rather than as the main meal. Henry and Anne would have eaten pottage flavoured with meat or fish and vegetables and expensive spices. As the serving of venison was restricted to the King and Queen’s table,5 they probably ate a pottage made with venison stock.

As an accompaniment to the roasted venison only Henry and Anne and their favourites were entitled to, a frumenty, another porridge-like food, would have been served.

Take a quart of sweet Cream, two or three sprigs of Mace, and a Nutmeg cut in half put into your Cream, so let it boil, then take your French Barley or Rice, being first washed clean in fair water three times, and picked clean, then boil it in sweet milk till it be tender, then put it into your cream, and boil it well, and when it hath boiled a good while, take the yolks of six or seven eggs, beat them very well, and thick∣en on a soft fire, boil it, and stir it, for it will quickly burn, when you think it is boiled enough, sweeten it to your taste, and so serve it in with Rose-water and Musk Sugar, in the same manner you may make it with wheat.7

Although Henry and Anne would have dined on expensive birds such as peacock, Henry’s cooks also used beef to create mock ‘larks’, thin slices of steak rolled and stuffed. Today they are known as beef olives. A chicken dish with Arabic origins also made its way into Henry’s households. A freshly killed chicken would have an incision made in the back of its neck, and the cook would inflate the chicken to separate the skin from the flesh. Once the chicken was prepared for cooking it would a rich stuffing would be placed between the skin and flesh and parboiled to keep it in place. The chicken would then be removed from the pot and spit-roasted, resulting in the ‘most succulent and delicious of dishes’. 8

Henry and Anne would have eaten a wide variety of sweets, most of them quite labour intensive. Jelly was a popular dish, which required hours of preparation. Gervase Markham instructs:

To make the best jelly, take calves feet and wash them and scald off the hair as clean as you can get it; then split them and take out the fat and lay them in wate, and then shift them: and then boil them in fair water until it will jelly, which you shall know by now and then cooling a spoonful of the broth; when it will jelly then strain it; and when it is cold then put in a pint of sack and whole cinnamon and ginger sliced and sugar and a little rosewater, and boil it all well together again: then beat the white of an egg and put it into it, and let it have one boil more: then put a branch of rosemary at the bottom of your jelly bag, and let it run through once or twice, and if you will have it coloured, then put in a little turnsole. 9

Turnsole was colouring obtained from the plant Chrozophora tinctoria which could give a violet or a deep red colour. Leach was another form of jelly made with another form of gelatin derived from fish.

To make the best leach, take isinglass and lay it two hours in water, and shift it and boil it in fair water and let it cool; then take almonds and lay them in cold water and till they will blanch: and then stamp them and out to new milk, and strain them and put in whole mace and ginger sliced, and boil them till it taste well of the spice; then put in your isinglass and sugar, and a little rosewater: and then let them all run through a strainer. 10

Jellies were served to important guests in a spectacular array of shapes, with Francesco Cheirgato marvelling over the jellies served to the Spanish embassy in 1517 – “the jellies of some 20 sorts perhaps, surpassed everything, they were made in the shapes of castles and animals of various descriptions, as beautiful and admirable as can be imagined.” 11 If they were dining simply in their chambers Henry and Anne may have preferred the less elaborate leach, which was cut into cubes and eaten with the fingers. They may have also have sent for a hot nightcap of aleberry or hippocras from the privy kitchen. I’ll leave you with Thomas Dawson’s recipe.

Take a gallon of white wine, sugar two pounds, of cinnamon, ginger, long pepper, mace not bruised, grains, galingall, and cloves, not bruised. You must bruise every kind of spice a little and put them in an earthen pot all day. And then cast them through your bags two or three times or more as you see cause. 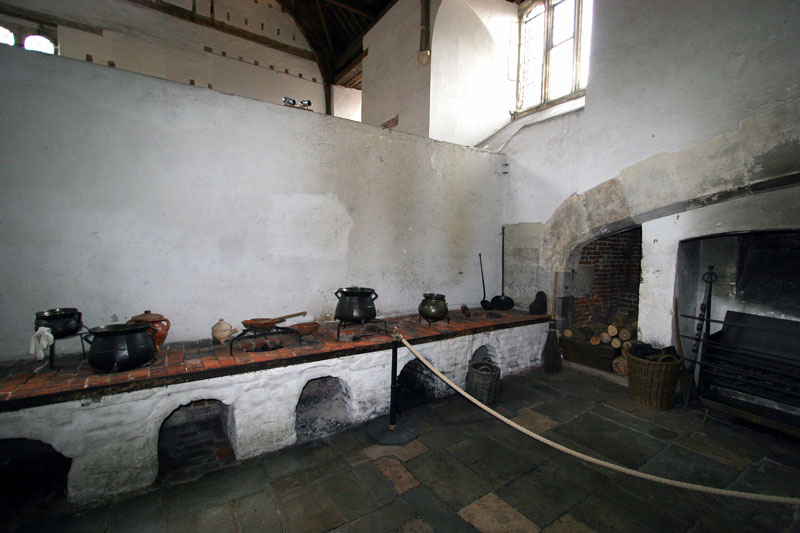