Who can forget two young girls who pretend they are prisoners in the Bastille to ward off the freezing cold and hunger; the first sail on the river that leads to a lifelong friendship, all the animals in the barn working together to protect a spider, a secret community of animals defeating the gun-toting villainous farmers, or a young boy who spent his whole childhood being neglected having friends, food and a whole new magical world thrust upon him in the same day? Here are five of our favourite feasts and friendships in children’s literature.

A Little Princess: The Magic Feast 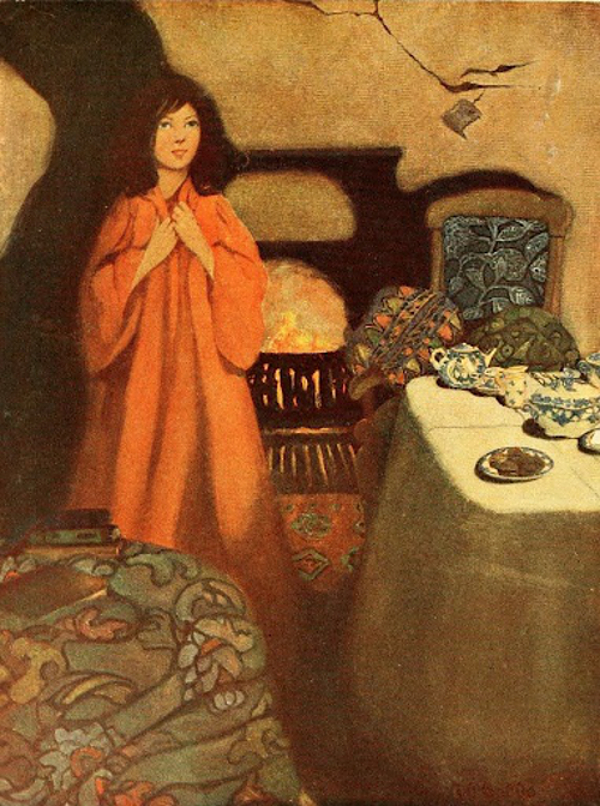 Who can forget the absolute joy when Sara and Becky discover an unexpected feast in Sara’s room in the middle of the night after being starved by Miss Minchin for two days?

“Imagine, if you can, what the rest of the evening was like. How they crouched by the fire which blazed and leaped and made so much of itself in the little grate. How they removed the covers of the dishes, and found rich, hot, savory soup, which was a meal in itself, and sandwiches and toast and muffins enough for both of them. The mug from the washstand was used as Becky’s tea cup, and the tea was so delicious that it was not necessary to pretend that it was anything but tea. They were warm and full-fed and happy, and it was just like Sara that, having found her strange good fortune real, she should give herself up to the enjoyment of it to the utmost. She had lived such a life of imaginings that she was quite equal to accepting any wonderful thing that happened, and almost to cease, in a short time, to find it bewildering.”

Wind in the Willows: Ratty and Mole’s Picnic 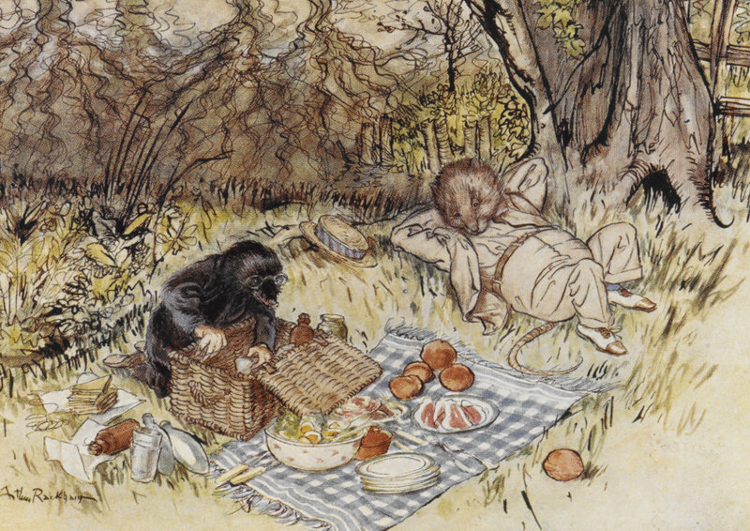 The start of a beautiful friendship…

“What’s inside it?” asked the Mole, wriggling with curiosity.

“O stop, stop,’ cried the Mole in ecstacies: “This is too much!”

“Do you really think so?’ enquired the Rat seriously. “It’s only what I always take on these little excursions; and the other animals are always telling me that I’m a mean beast and cut it very fine!” 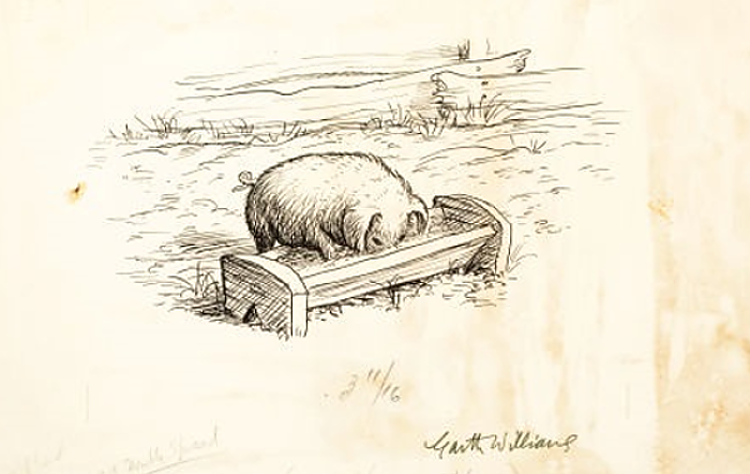 After a rather frightening afternoon where Charlotte was almost captured, Wilbur tucks into his hearty lunch…

“It was a delicious meal – skim milk, wheat middlings, leftover pancakes, half a doughnut, the rind of a summer squash, two pieces of stale toast, a third of a gingersnap, a fish tail, one orange peel, several noodles from a noodle soup, the scum off a cup of cocoa, an ancient jelly roll, a strip of paper from the lining of the garbage pail, and a spoonful of raspberry jello.

Wilbur ate heartily. He planned to leave half a noodle and a few drops of milk for Templeton. Then he remembered that the rat had been useful in saving Charlotte’s life, and that Charlotte was trying to save his life. So he left a whole noodle, instead of a half.” 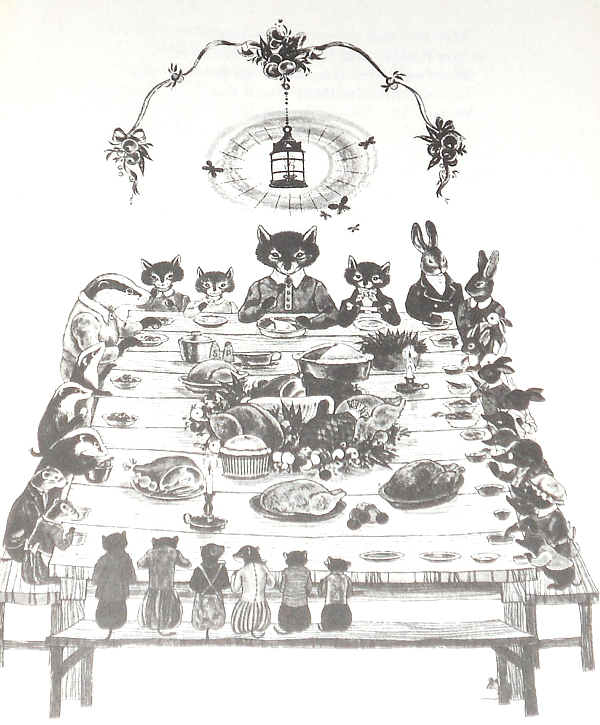 The beginnings of an underground Utopia…

“”This delicious meal…” [Mr Fox] began, then he stopped. In the silence that followed, he belched. There was laughter and more clapping. “This delicious meal, my friends,” he went on, “is by courtesy of Messrs Boggis, Bunce and Bean.” (More cheering and laughter.) “And I hope you have enjoyed it as much as I have.”

“But now, my friends, let us be serious,” said Mr Fox. “Let us think of tomorrow and the next day and the days after that. If we go out, we will be killed. Right?”

“They’ll shoot us before we’ve gone a yard,” said Badger.

“Exactly” said Mr Fox. “But who wants to go out, anyway; let me ask you that? We are all diggers, every one of us. We hate the outside. The outside is full of enemies. We only go out because we have to, to get food for our families. But now, my friends, the situation has changed. We have a safe tunnel leading to three of the finest stores in the world!”

“And you know what this means?” said Mr Fox. “It means that we don’t ever need to go out into the open again!”

There was a buzz of excitement around the table.

“I therefore invite you all,” Mr Fox went on, “to stay here with me for ever.”

“For ever!” they cried. “My goodness! How marvelous!” And Rabbit said to Mrs Rabbit, “My dear, just think! They are never going to shoot at us again!”

“We will make,” said Mr Fox, “a little underground village, with streets and houses on each side with houses for Badgers and Moles and Rabbits and Weasels and Foxes. And every day I will go shopping for you all. And every day we will eat like kings.”

The cheering that followed this speech went on for many minutes.” 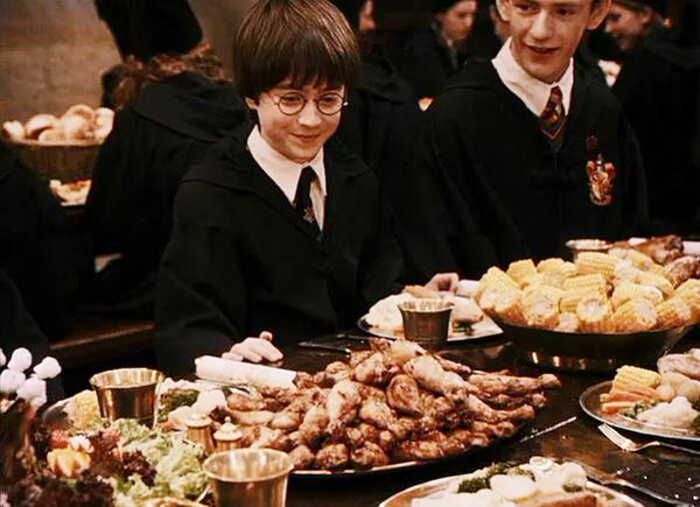 The end to a perfect day. For the first time in his life, Harry gets to eat whatever he likes and as much of it as he can.

“Mad?’ said Percy airily. ‘He’s a genius! Best wizard in the world! But he is a bit mad, yes. Potatoes, Harry?’

Harry’s mouth fell open. The dishes in front of him were now piled with food. He had never seen so many things he liked to eat on one table: roast beef, roast chicken, pork chops and lamb chops, sausages, bacon and steak, boiled potatoes, roast potatoes, chips, Yorkshire pudding, peas, carrots, gravy, ketchup and, for some strange reason, mint humbugs.”